Old and new knitted together at De Lakenhal museum

Built in 1640 during Holland’s Golden Age by city architect Arent van ’s-Gravesande, Leiden’s palatial De Lakenhal cloth hall was testament to the city’s economic might and the renown of its main commodity. But if the impressive classical language of its facade spoke in power terms, its H-shaped plan was far more pragmatic, dealing with utility and process rather than civic and global stature. Merchants arrived by boat at its canal-side walled courtyard, submitting their goods to initial quality control in the open air or beneath the sheltering arcades of its two wings. From there merchants were received in the hall’s ground floor vestibule and left to wait in De Lakenhal’s northern courtyard, their goods taken to the first-floor trading hall to be sold.

Off this main trading hall four rooms served official and ceremonial purposes for the cloth guild: the Governor’s Office, the Steelmaster’s Office, the Brewmaster’s Room to oil the wheels of business, and, perhaps most importantly, the Stamp Room. Here, cloth meeting the guild’s quality standards was ‘stamped’ with a lead embossing of the city’s coat of arms, making it tradeable globally. Visitors to De Lakenhal Museum will chance upon this motif all over Rotterdam firm Happel Cornelisse Verhoeven’s new extension – with conservation and refurbishment by London’s Julian Harrap Architects.

If these historical functions appear self-evident to the visitor, that too is due to the architects, as changing use and piecemeal addition in intervening years had rendered the original building almost unrecognizable. A public museum opened in 1870 in its attic storey, reached by a new stair in the north courtyard, the lowest flight of which was relocated when the new Harteveltzaal gallery was built two decades later. A neo-classical extension with its own entry, added to the museum’s east wing, it compounded the spatial confusion with a warren of internal corridors. And when a 1980s steel and polycarbonate canopy clumsily enclosed the south courtyard, the building’s descent from monumental via the civic to the municipal was sealed.

The latest scheme, won in competition in 2013, extended the complex to the west and north. It created two new state of the art gallery spaces below stacked service and administrative functions for the museum, and had at its heart the notion of stripping away past additions to reveal De Lakenhal in its former guise – a task that HCV Architects felt was best addressed with Harraps’ expert input. Under Harraps’ reinstatement and reinterpretation of the past plan, legibility is created for visitors with the £16 million result revealing the south courtyard in its full glory and the stair and circulation in the north courtyard making way for an orientating, internal central atrium, the Achterplaets.

The museum’s new, four-storey post-modern north elevation, overlooking the Lammermarkt public square, is the most obvious aspect of this transformation. But if it looks radically different to the rest of De Lakenhal, HCV was, says partner Paul Verhoeven, inspired by van ’s-Gravesande’s original design. ‘While the concrete structure of its rear elevation is quite tall, we emulated his ideas to mitigate its scale with the Lammermarkt,’ he explains. ‘Where van ’s-Gravesande used projecting wings to deal with the lower scale of the canal frontage and the taller palace behind, we have fused the two in our elevation.’ Here, brick corbelling reveals itself by degrees from the facade of pale grey/green Petersen brick, delineating in negative the roofline edging the Lammermarkt, resulting in its angled window profile. Verhoeven adds that the decision to minimise surface modulation at upper levels was behind the gold powder-coated aluminium window sections, detailed to keep brick, glass and frame in line with each other. Seen together, there’s a sense of almost defensive drama.

It’s one aided by the complexity of the brickwork in its rusticated base which required thousands of hand-cast ‘specials’. While keeping the museum’s main entrance via the south courtyard was as much an emotional as practical decision, it did avoid any need for circulation from the Lammermarkt side. But even on this ‘service’ side of the building, there’s robust dignity to the detailing. The steel access door for trucks delivering artworks was designed with artist Hansje van Halem and is counter-pointed by the smaller entrance to workshop and office floors above. Balancing the modulated triptych of openings is the large arched deep-set window that gives direct views in and out of the gallery – across to the 18th century De Valk windmill. The three arches reference its hemispherical cap, Verhoeven points out.

From outside, HCV’s intervention is less obvious on the canal side, where the firm replaced an earlier extension with a narrow strip that provides a café and WCs accessed from street, courtyard or vestibule. It might be small, but it’s articulated. ‘Like the north elevation, we created a base plinth, mid section and crown. It’s classical but in a modern way,’ notes Verhoeven.

Internally, the biggest moves were reserved for the two new galleries and the north courtyard; revealing them necessitated wholesale removal of 150 years of random poché – including, controversially, the Joristrap staircase. But its snug repositioning behind the café was crucial to unlocking circulation, explains Verhoeven. Once more, van ’s-Gravesande’s north wings project visibly from his main block, forming three sides of the enclosed, rooflit Achterplaets, the north side of which has the entrance to the Harteveltzaal and HCV’s new galleries. ‘With the maze of corridors removed, the old north courtyard is the new orientation point for the museum, letting visitors move easily into our block, the original building, Harteveltzaal, or the 1928 wing,’ explains Verhoeven. Its ‘intelligent roof’ is formed of steel beams stretching its length, each alternate one containing a gutter for the double-glazed roof panels that run in a low zig-zag across it. High-level air feeds at the perimeter invisibly condition the space, exhausting out through De Lakenhal’s ground floor vestibule. Voids between bricks on its north face aid acoustic insulation to leave this concrete-floored hard space comfortably attenuated. 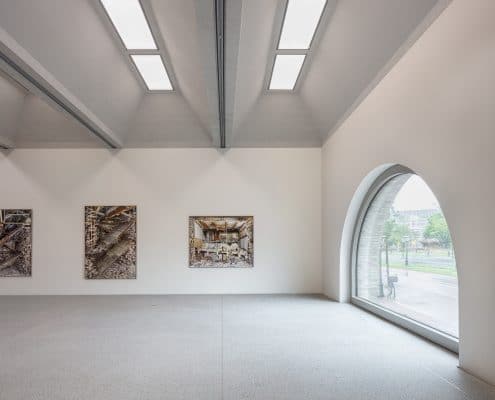 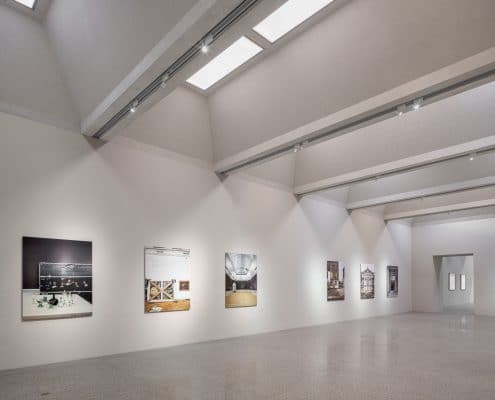 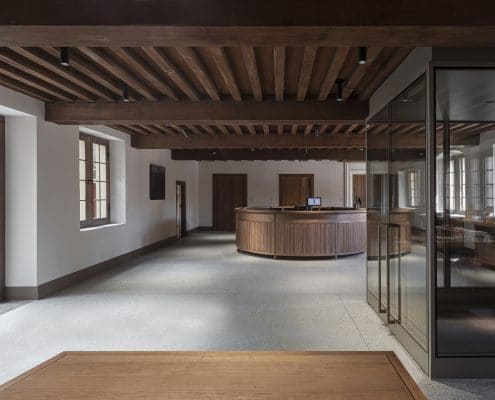 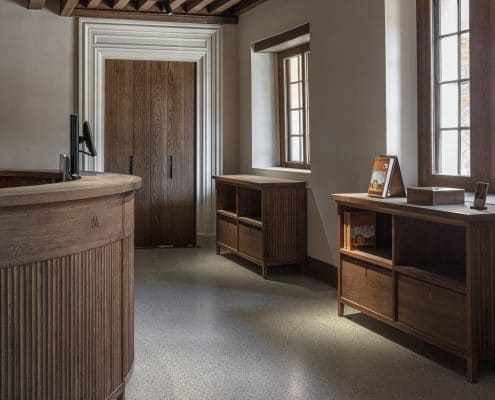 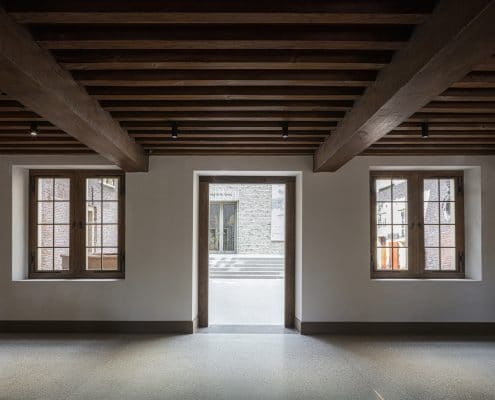 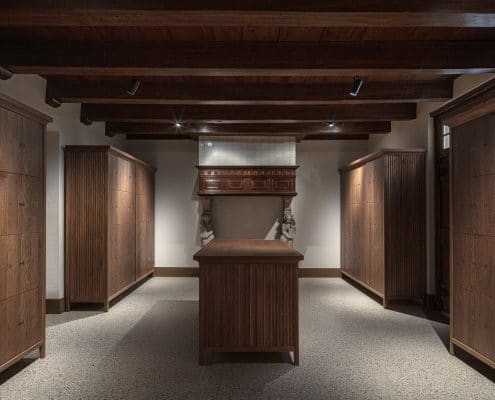 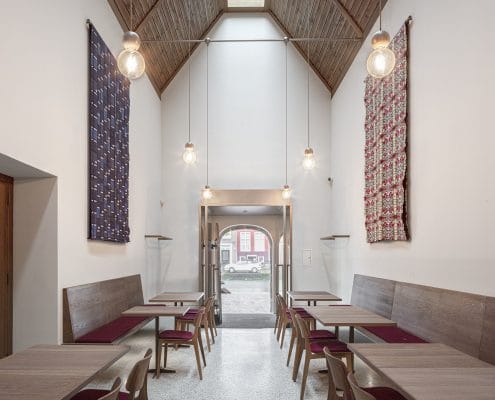 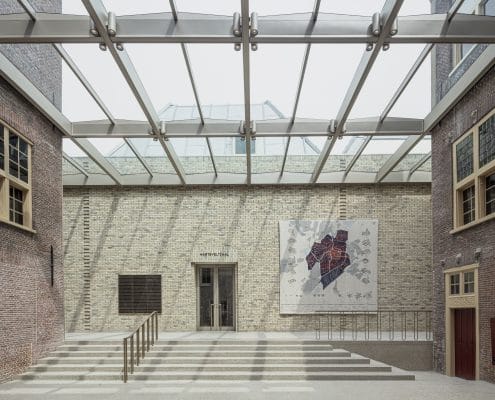 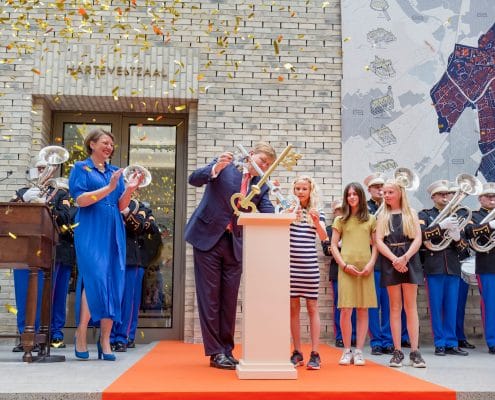 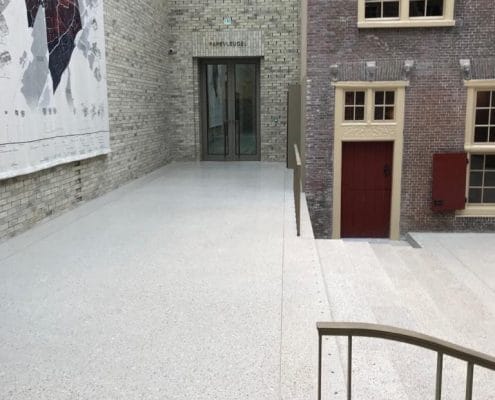 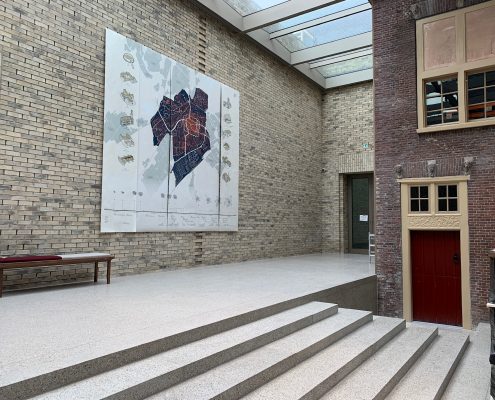 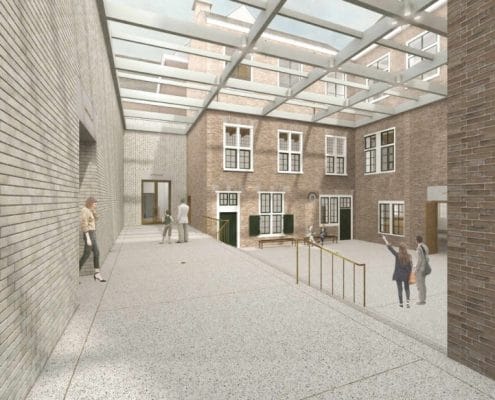 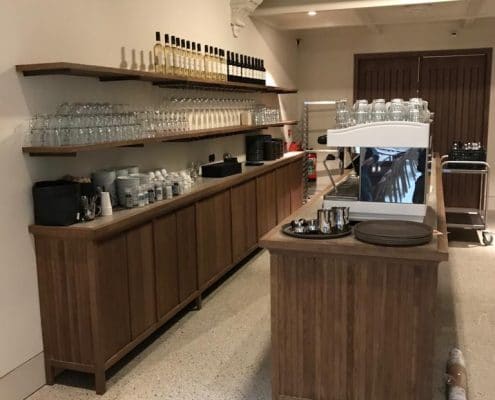 Eterno Minerals of the World BV

This site uses cookies. By continuing to browse the site, you are agreeing to our use of cookies.

We may request cookies to be set on your device. We use cookies to let us know when you visit our websites, how you interact with us, to enrich your user experience, and to customize your relationship with our website.

Click on the different category headings to find out more. You can also change some of your preferences. Note that blocking some types of cookies may impact your experience on our websites and the services we are able to offer.

These cookies are strictly necessary to provide you with services available through our website and to use some of its features.

Because these cookies are strictly necessary to deliver the website, refusing them will have impact how our site functions. You always can block or delete cookies by changing your browser settings and force blocking all cookies on this website. But this will always prompt you to accept/refuse cookies when revisiting our site.

We fully respect if you want to refuse cookies but to avoid asking you again and again kindly allow us to store a cookie for that. You are free to opt out any time or opt in for other cookies to get a better experience. If you refuse cookies we will remove all set cookies in our domain.

We provide you with a list of stored cookies on your computer in our domain so you can check what we stored. Due to security reasons we are not able to show or modify cookies from other domains. You can check these in your browser security settings.

These cookies collect information that is used either in aggregate form to help us understand how our website is being used or how effective our marketing campaigns are, or to help us customize our website and application for you in order to enhance your experience.

If you do not want that we track your visit to our site you can disable tracking in your browser here:

We also use different external services like Google Webfonts, Google Maps, and external Video providers. Since these providers may collect personal data like your IP address we allow you to block them here. Please be aware that this might heavily reduce the functionality and appearance of our site. Changes will take effect once you reload the page.

The following cookies are also needed - You can choose if you want to allow them: